LG has made a name for its V series by stuffing the phones with top-notch multimedia recording features, and its latest addition takes this much further than before. The new V30, unveiled here at IFA 2017, is the first smartphone to offer a glass lens with a f/1.6 aperture, and offers nifty video-recording tools that should excite aspiring Spielbergs. To see if it really lives up to LG’s promises, I took the V30 around on a trigger-happy tour of Berlin’s Tier Garden, and found it a versatile, powerful camera (at least, in daylight). In fact, its filmmaking features made me feel like I could pass for a somewhat experienced director.

Thanks to its glass lens with f/1.6 aperture, the V30 captured impressively bright, vibrant and crisp pictures at Berlin’s Tiergarten one sunny morning. My close-up shots of flowers in the rose garden came out clear, and I was taken by the striation details in the petals even when I zoomed in on the picture afterwards to beyond 100 percent. That wide aperture also helps in low-light conditions, allowing the V30 shoot in the dark with relative ease. My pictures of Berlin streets at night were accurately colored and clear, although I still noticed noise in pictures that were taken in extremely dark places. 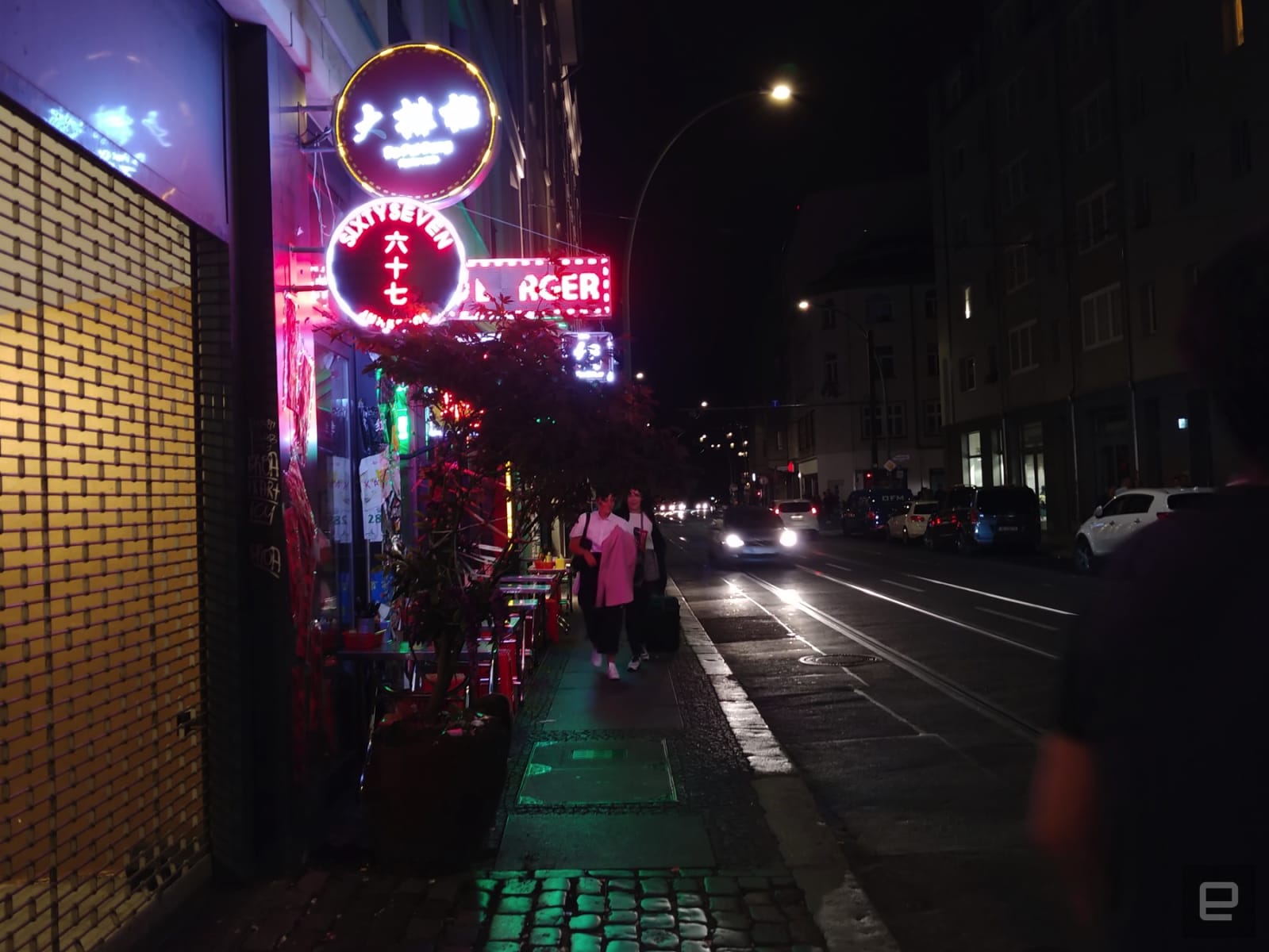 The wide angle lens came in particularly handy when I tried to shoot all of the Victory Column and the round island it sits on. By tapping a button at the top of the viewfinder, I switched over to the 13-megapixel wide-angle sensor and immediately gained extra room on either side of the scene. The problem with the wide-angle lens is that it’s less adept at managing dynamic range than the regular camera, so my pictures often had blown-out skies and dark shadows. 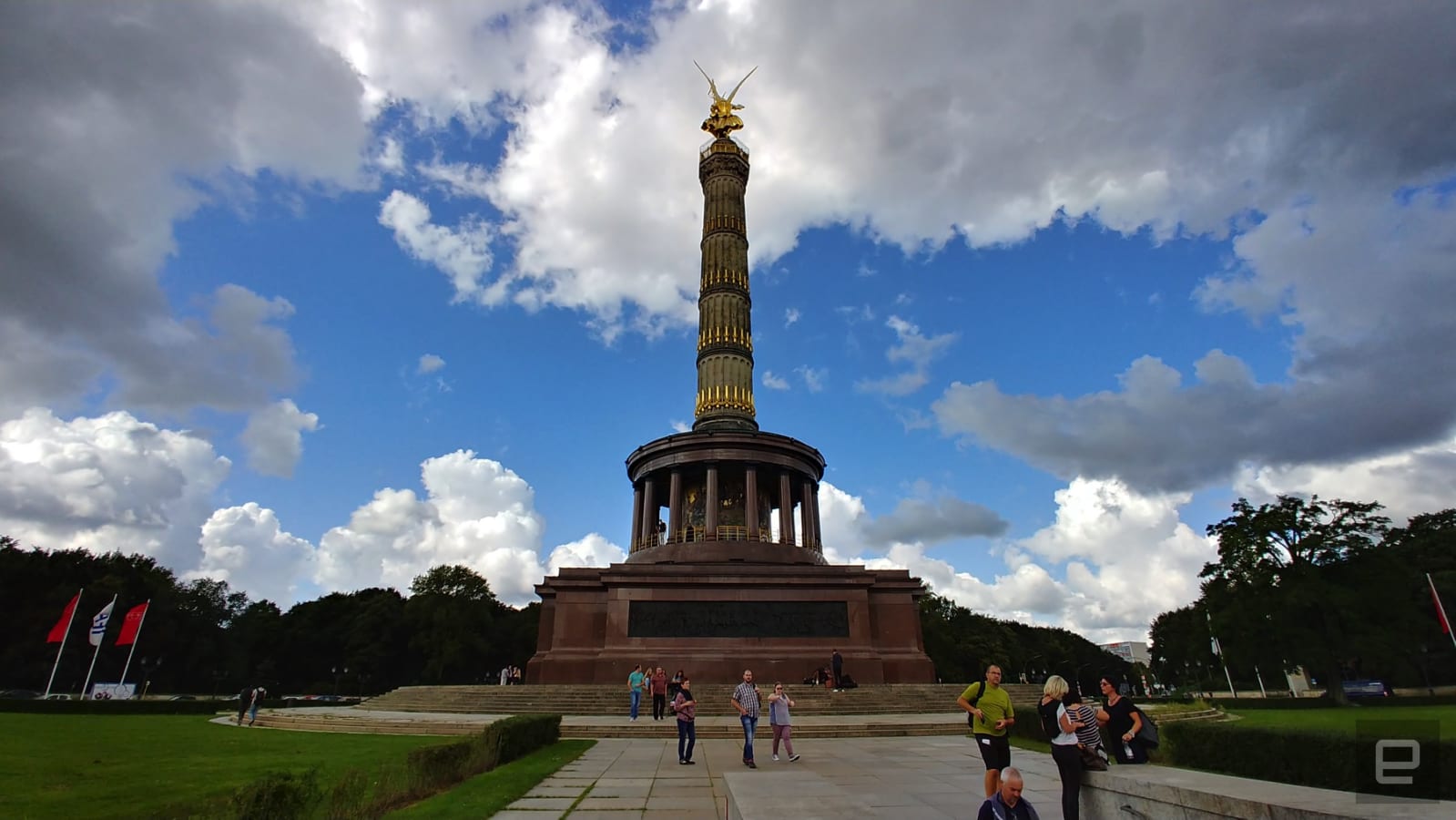 In fact, I’ve found that both of the V30’s rear cameras tended to slightly overexpose. This generally happened in pictures with large dynamic range (i.e. very dark areas as well as very bright spots in the same scene), which can usually be addressed by HDR software. Auto-HDR is conveniently enabled by default on the V30. However, it caused some strange discoloration on the pictures — clouds appeared purple, while the side of my colleague’s face had green streaks along his hairline.

Dynamic range wasn’t the V30’s only weakness. LG’s software also appeared to be oversharpening pictures, causing pixelated edges in some situations. In particular, images shot in low light sometimes appear muddy. So far it’s hard to tell the conditions that are causing this artifact, and since the device I was using has pre-production software, it’s possible that this could be addressed before the phone ships to consumers. 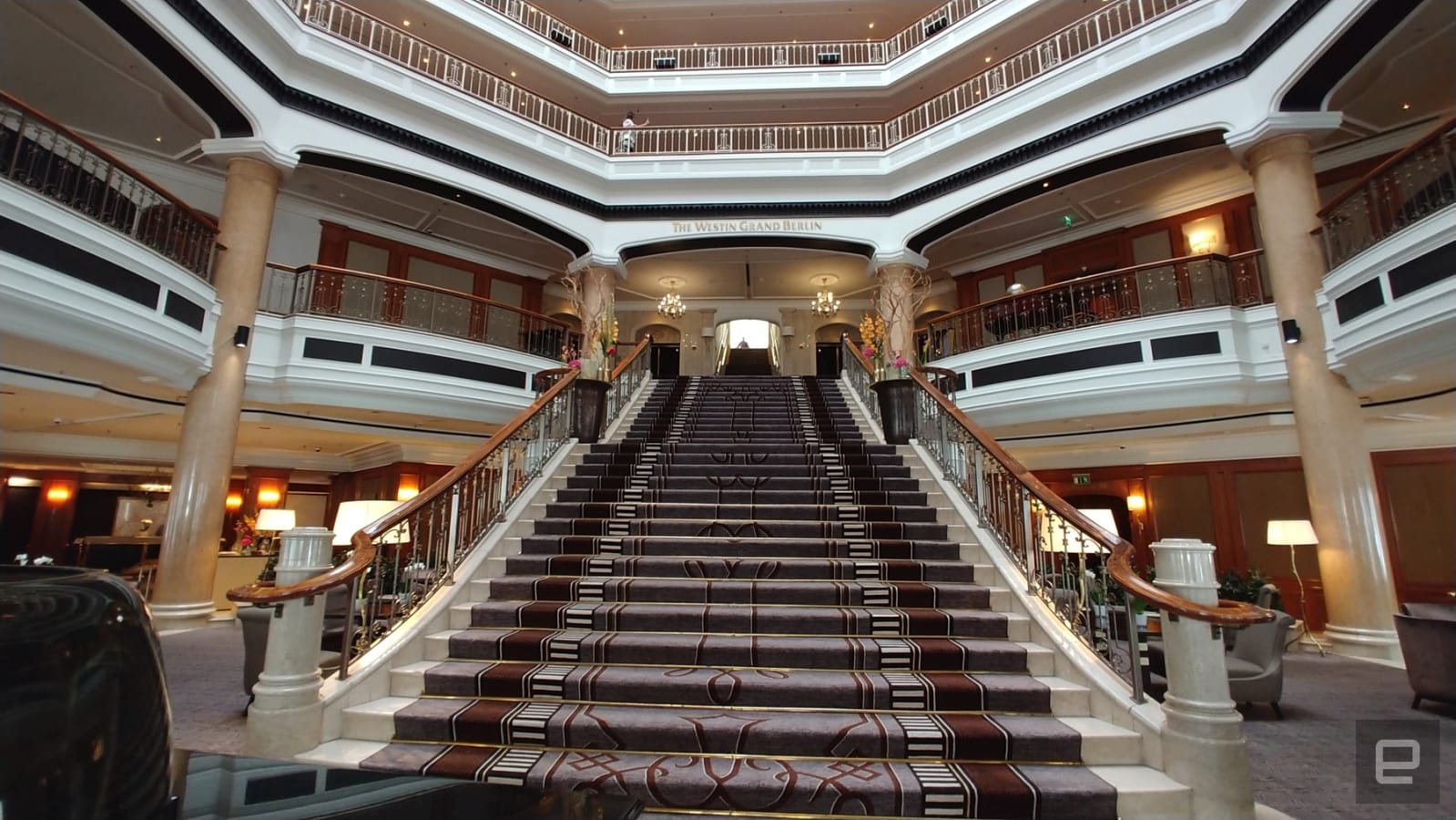 These issues are minor compared to some of the benefits you get with the V30, though. The biggest advantage is LG’s new Cine Video mode, which lets you shoot moody, cinema-quality videos with the phone. I didn’t care very much for the filters when I first saw them at a briefing in New York, but after trying them at the majestic staircase in our hotel’s lobby, I have to admit I’m impressed. The footage of Engadget’s senior editor Dan Cooper walking down the steps looked suitably dramatic when I shot it with the “Summer blockbuster” filter applied, and took on a nostalgic tone reminiscent of an old-school mafia movie with the “Noir” option selected.

The highlight of Cine Video is the new “Point zoom” feature, that lets you pick any part of the frame to focus on. Then, when you drag the onscreen zoom slider to get close to your subject, the V30 will keep your selected area centralized. I really dug this feature for the flexibility and convenience it affords an aspiring filmmaker. Another V30 offering that’s a nice touch for videographers is the ability to save your files in Cine Log format, which gives you more room to tweak your color profiles after exporting them to your computer. 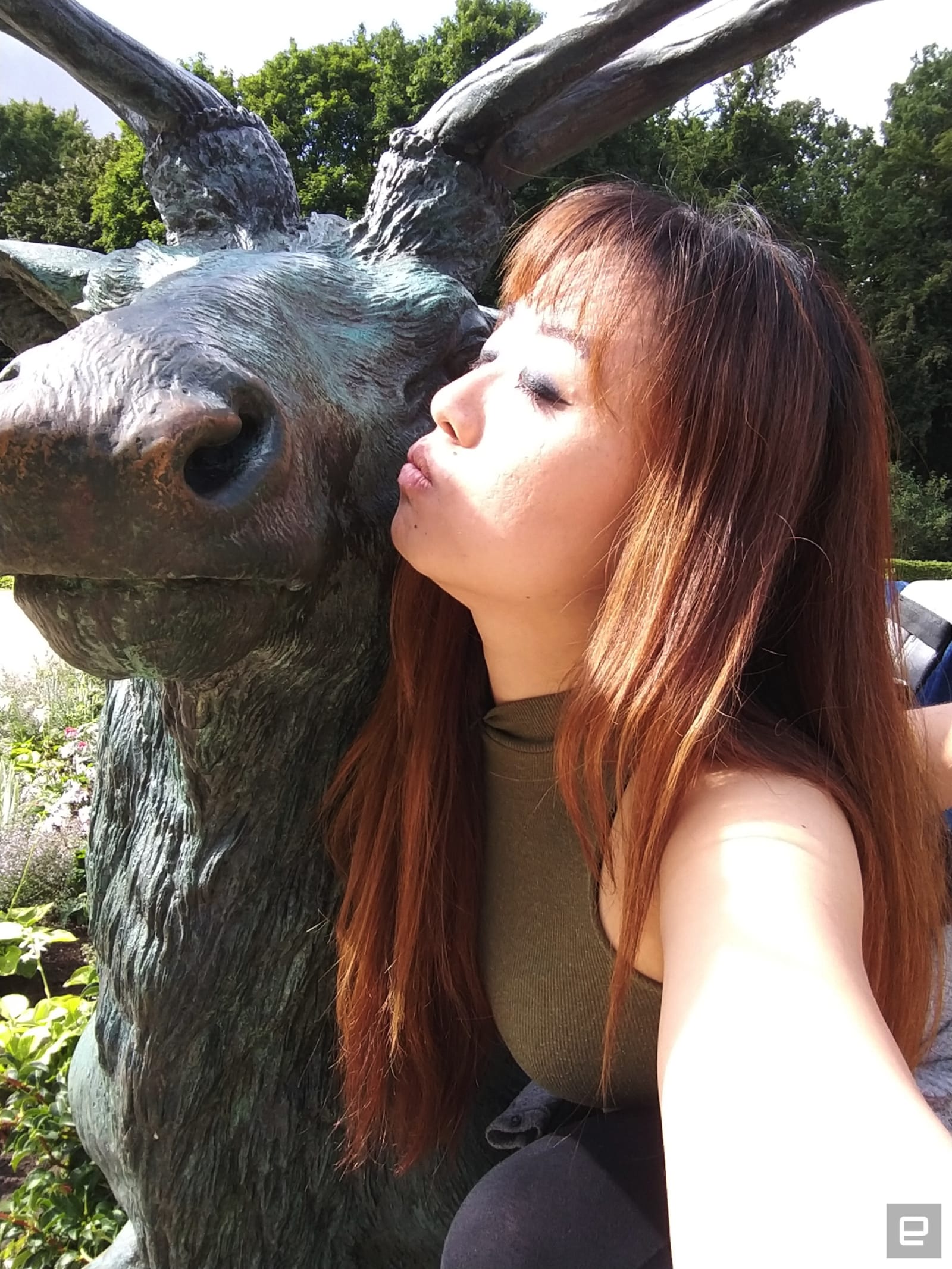 Selfie aficionados like myself may be underwhelmed by the V30’s relatively low-res front camera. Its 5-megapixel sensor is not as sharp as the competition, but it still delivered vivid selfies with adequate detail. I puckered up next to a statue of a moose in the park, and the V30’s front camera captured individual strands of my hair, as well as fur patterns on the moose.

The portraits were also exposed evenly: my selfie with the Victory Column behind me rendered a deep blue sky, puffy white clouds in the background, while my face and the golden statue were just as clear. I also appreciated the wide-angle mode on the front camera, too, which let me squeeze in two more colleagues in a group-fie from the back of a cab. In that picture, though, details like my hair and my colleagues’ stubbled faces were muddy, most likely due to motion blur. 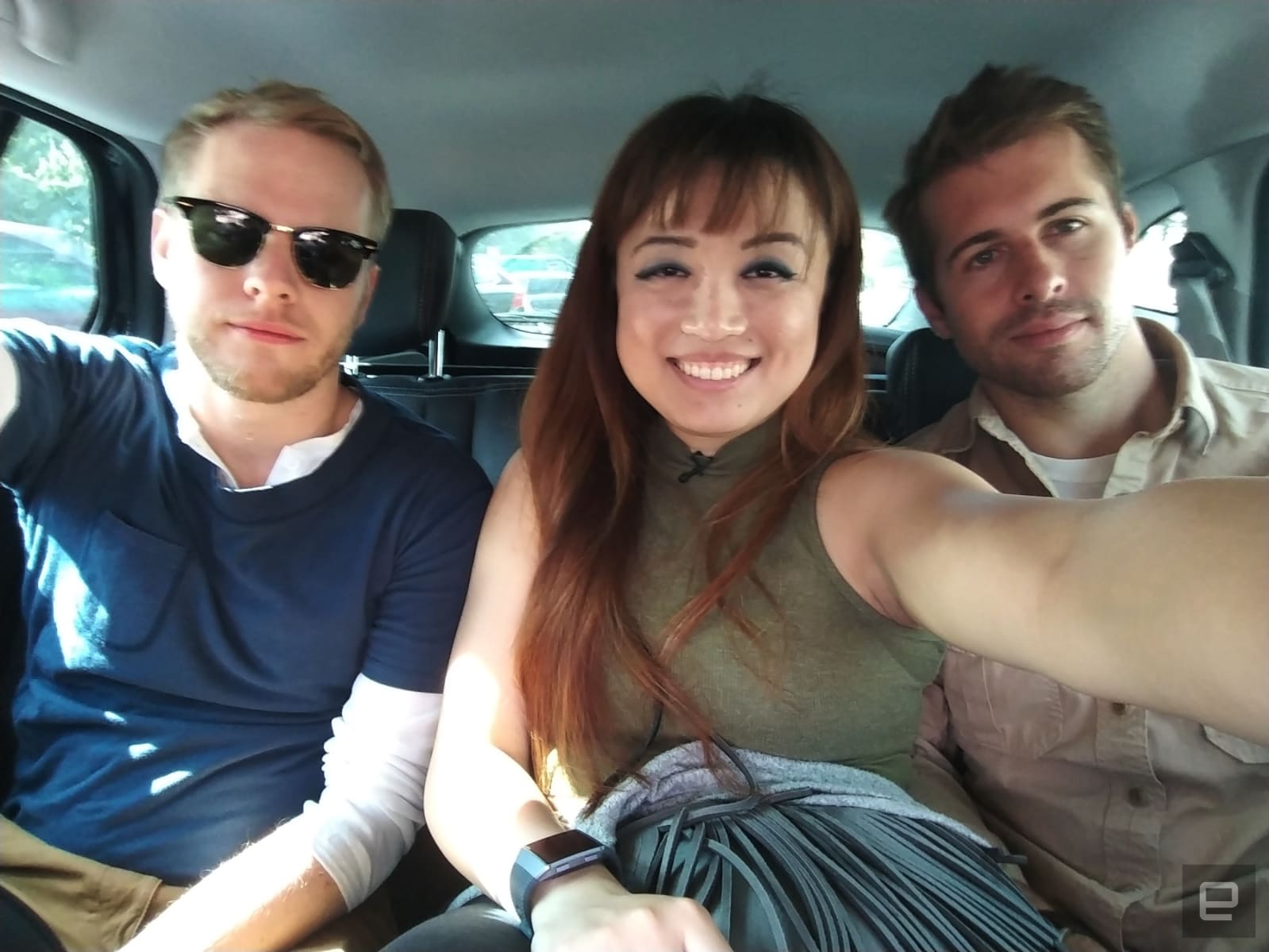 My time with the V30 so far has left me inspired to record more video and landscapes. Its still photography is respectable, although Samsung and Apple’s flagships deliver similar, if not better, quality shots in general. Still, few devices come close to offering the suite of powerful video tools that LG does with the V30 — owning the niche it has carved out.