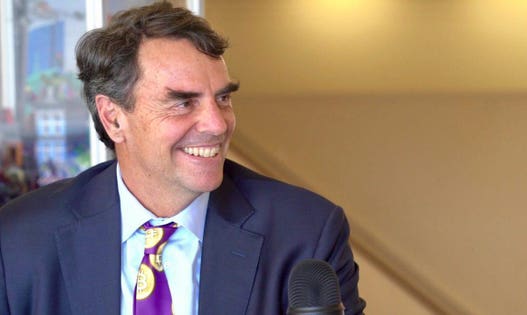 Tim Draper speaks with Forbes Contributor, Rachel Wolfson, about the future of Bitcoin and cryptocurrencies.

Last month, the famous venture capitalist and inspiring entrepreneur, Tim Draper, made a prediction that Bitcoin will hit $250,000 by the year 2022.

“I didn’t want to make any predictions after that for a long time because I wanted to let the dust settle. Yet last month I thought that it was time for another prediction, while introducing my new book, How To Be The Startup Hero: A Guide and Textbook for Entrepreneurs and Aspiring Entrepreneurs,” Tim Draper told me in an exclusive interview.

Intrigued by Draper’s recent prediction and strong interest in cryptocurrency, I sat down with Draper to ask him about his reasoning behind his latest Bitcoin prediction, his new book and why he believes cryptocurrency will eventually replace fiat currencies completely.

Rachel Wolfson: In your new book, How To Be The Startup Hero, you begin with some definitions of what a hero is. You specifically talk about how a hero “goes long.” In crypto, “hodling” is a term we use for going long. How does this relate to being a hero?

Tim Draper: As a “hodler” myself, I believe it’s important to sacrifice in the short term for a long-term gain. Having a long-term approach to everything goes a long way – from investing to being an entrepreneur to just living your life.

A “hero” takes a long view at a low probability outcome, but the outcome will always be big. In fact, the outcome may or may not happen. In the ICO (initial coin offering) world, the heroes are those who are putting their necks out there to create a new coin or token to transform industries. For instance, ICO heroes are creating a token to transform governments by making them virtual. Crypto heroes have identified a technology that can take on the big monopoly and transform the world.

Draper: The predication that lead me to come up with $10,000 by 2017 was based on the idea that Bitcoin was going to be easy enough to use in the future and that people would be able to start trading with it and using it as a store of value. That is why I invested in Bitcoin.

Now, I think people are going to be able to spend cryptocurrencies, like Bitcoin, in mainstream situations. Cryptocurrencies will eventually replace credit cards and will be something you can access on your phone. I actually think cryptocurrency will replace fiat currencies entirely.

I predicted that Bitcoin might end up with a 20% to 30% market share. I sketched that out and I think the asymptote is somewhere around $130 trillion, but only maybe $100 trillion would be cryptocurrency and 20% of that would be Bitcoin. However, it would take 10-15 years to reach that asymptote, so I’m thinking that along the way we are going to see Bitcoin at $250,000 by 2022. That was one way I looked at predicting it.

I also look at Bitcoin as a network effect. For instance, if I have Bitcoin and no one else does, then its worthless. But, if I have Bitcoin and you have Bitcoin, and we both recognize that, then we have one connection. Then, the connection grows – it’s the square of how many nodes are in the network. Right now there are 40 million Bitcoin wallets. I think that this number will continue to grow and the value of Bitcoin will be determined by the square of that.

Wolfson: Do you really think that fiat currency will disappear entirely?

Draper: I think that&nbsp;in the future fiat will resemble&nbsp;carrying around change. For example, I think we will get to the point where we will go to buy coffee with fiat and the barista will look at us like we are crazy. I also think that soon we will be able to buy coffee and other things with Bitcoin, Ether, Bitcoin cash or any number of other cryptocurrencies all on our phone.