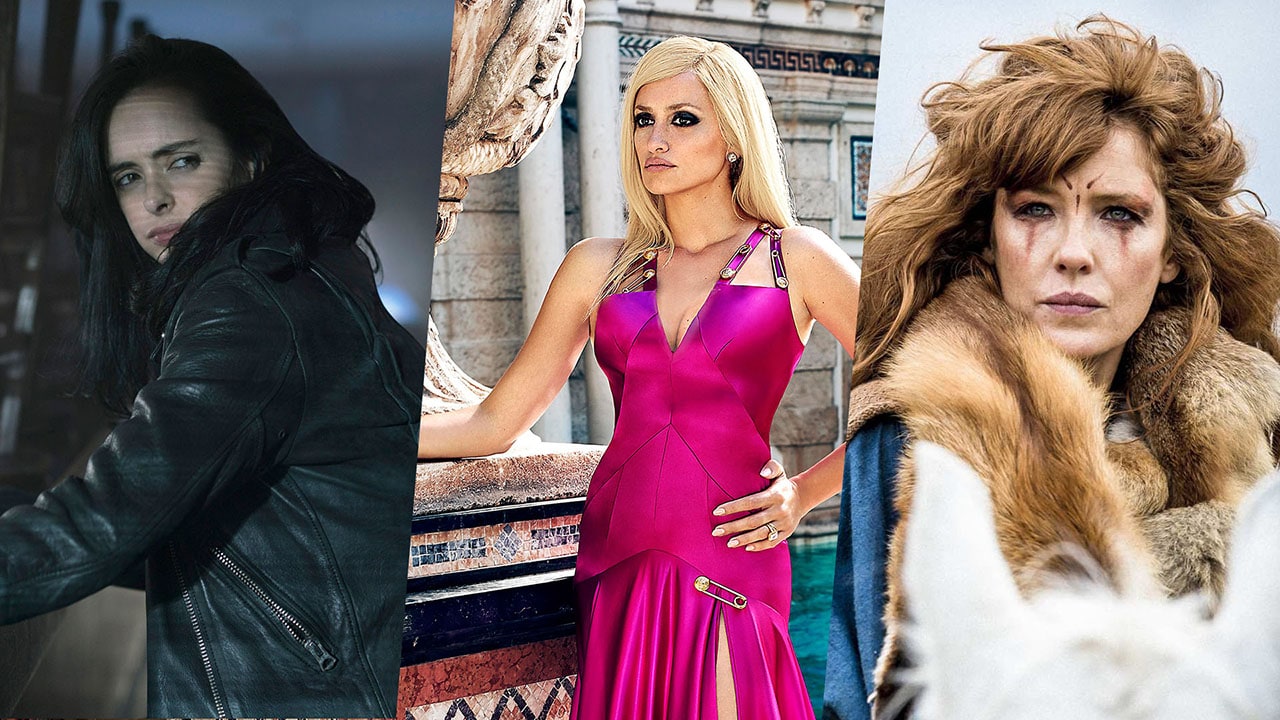 2018 is upon us, and that means another year filled with tons of TV shows. While some big names such as Game of Thrones and Stranger Things are taking the year off to prepare for their next instalment, there are returning names below that were missing for all of 2017. But the bulk of the upcoming winter – we don’t know much beyond March right now, since that’s how scheduling works – is filled with promising new dramas that could deliver the perfect binge-watch.

Here’s how you can fill your time for the next three months:

The X-Files
When: January 3
Where: Fox

Gillian Anderson and David Duchovny reprise their roles as FBI special agents for an eleventh year in the second year of the show’s revival era, whose rating success (despite negative critical reception) convinced Fox to greenlit a 10-episode new season. The premiere and finale will focus on the long-arc storyline, with the other episodes being standalone, with appearances from Annabeth Gish, Robbie Amell, Lauren Ambrose, Karin Konoval, Barbara Hershey, and Haley Joel Osment.

Luther creator Neil Cross is back with a pre-apocalyptic crime drama starring Agyness Deyn and Jim Sturgess as Elaine Renko and Charlie Hicks, two police officers in contemporary London who come across proof that the world is headed for destruction in five years, while on a case involving the death of a hacker. Hard Sun will premiere in January on BBC One with new episodes each week, before arriving in full on Hulu in March.

Star Trek: Discovery
When: January 7
Where: CBS All Access, Netflix

The prequel to the original series returns with Chapter 2, aka part two of its first season, with six new episodes to come. It will culminate the Federation-Klingon war with the crew of the USS Discovery at its centre, while exploring the dynamic relationships between themselves, including the unranked Michael Burnham (Sonequa Martin-Green), the Spock-like Saru (Doug Jones), ex-POW Ash Tyler (Shazad Latif), openly gay head of science Paul Stamets (Anthony Rapp), and manipulative captain Gabriel Lorca (Jason Isaacs).

The roster of DC Comics superhero shows on CW expands once again with Black Lightning, making him the first African-American superhero with his own standalone comics. Strangely, it won’t connect to the other DC shows (unlike the four others which have crossover episodes) and will instead focus on the hero’s own journey: coming out of retirement to fight crime and keep his daughters safe. Cress Williams plays the hero, with the show created by Mara Brock Akil (The Game) and her husband Salim Akil.

The Assassination of Gianni Versace: American Crime Story
When: January 17
Where: FX

Ryan Murphy’s true crime anthology series, which delivered a hit with its exploration of O.J. Simpson’s trial in 2016, is back with a second instalment that focuses on the 1997 murder of designer Gianni Versace (yep, that Versace) by serial killer Andrew Cunanan, based on Maureen Orth’s book Vulgar Favors. Édgar Ramírez and Darren Criss star as Versace and Cunanan, with Penelope Cruz and Ricky Martin also part of the cast.

Britannia
When: January 18
Where: Sky Atlantic

Set in 43AD, this historical period drama will look at the Roman empire’s invasion and conquest of Britain, led by General Aulus Plautius (David Morrissey), and the resistance put up by the wild warrior women of the Celts, with rivals Kerra (Kelly Reilly) and Antedia (Zoë Wanamaker) forced to work together if they wish to survive. The nine-part series, which has a feature-length premiere, will be available in its entirety on release day.

Counterpart
When: January 21
Where: Starz

J.K. Simmons has a dual role in this sci-fi thriller, where he plays a lowly cog in a bureaucratic UN agency who finds out his employers have been guarding a secret: a crossing to a parallel dimension. Simmons’ counterpart – hence the title – in the other dimension is much more than a cog, and the show will explore themes of identity, idealism, what ifs, and lost love. Olivia Williams, Harry Lloyd, and Nazanin Boniadi are also part of the cast, while Morten Tyldum (The Imitation Game) has directed the pilot.

The Alienist
When: January 22
Where: TNT

Cary Fukunaga (Beasts of No Nation, True Detective) is behind this series adaptation of Caleb Carr’s novel of the same name, which is set in late-19th century New York and looks at a series of gruesome murders of boy prostitutes. It fictionalises history, with newly-appointed police commissioner Teddy Roosevelt (Brian Geraghty) forming a team of criminal psychologist Dr. Laszlo Kreizler (Daniel Brühl), illustrator John Moore (Luke Evans), and secretary Sara Howard (Dakota Fanning) to conduct an investigation in secret.

Mosaic
When: January 22
Where: HBO, Hotstar

After releasing as an app in November that allowed users to view the same story from different perspectives, Steven Soderbergh and writer Ed Solomon (Men in Black) bring this murder mystery to the screen as a six-episode conventional series, which begins on a Monday and ends Friday with a double-header. Sharon Stone (Basic Instinct) leads the cast as a children’s book author and illustrator, surrounded by Garrett Hedlund, Frederick Weller, Jennifer Ferrin, Devin Ratray, Maya Kazan, Beau Bridges, Michael Cerveris, and Paul Reubens.

Dirty Money
When: January 26
Where: Netflix

Oscar winner Alex Gibney (Taxi to the Dark Side) and fellow documentary filmmakers “provide an up-close and personal view into untold stories of scandal and corruption in the world of business” in this new Netflix documentary series, with episodes focusing on Donald Trump’s business career, HSBC’s role in laundering drug money, Volkswagen’s deceit of government agencies, and the theft of $20 million worth of maple syrup.

Altered Carbon
When: February 2
Where: Netflix

Blade Runner meets Ghost in the Shell in this mega-budget adaptation of Richard Morgan’s 2002 sci-fi cyberpunk novel, where people of wealth can transfer their consciousness into a new body to live as long as they please. Here, one such individual tasks former warrior Takeshi Kovacs (Joel Kinnaman), to solve the murder of said individual’s previous body, known as a “sleeve” in the world of Altered Carbon. Laeta Kalogridis (Shutter Island) serves as creator, with Miguel Sapochnik (Game of Thrones) directing the pilot.

The Handmaid’s Tale
When: February 5
Where: AXN

The second season of Hulu’s adaptation of Margaret Atwood’s dystopian novel isn’t due until April, but the show’s critically-acclaimed multiple Emmy-winning first season – one of our favourites from 2017 – is finally coming to Indian TV on AXN in February 2018. Those who weren’t lucky enough to catch it last year will be treated to a powerful drama, with top-notch performances from Elisabeth Moss and supporting cast, plus a look and feel like no other.

The Handmaid’s Tale Is a Terrific Argument Against Orthodoxy

Here and Now
When: February 11
Where: HBO, Hotstar

Alan Ball, the creator of Six Feet Under and True Blood, offers “provocative and darkly comic meditation” on contemporary society in the US, focusing on two families: a progressive multi-ethnic one with a philosophy professor (Tim Robbins) and his attorney wife (Holly Hunter), who have adopted children from Vietnam, Liberia and Colombia in addition to a sole biological one, and a Muslim family headed by a psychiatrist who’s treating one of their children.

The Tick
When: February 23
Where: Amazon

Ben Edlund’s third adaptation of his own comic series returns with the second half of its season (the remaining six episodes), which will continue the adventures of the titular big blue bug guy, now played by Peter Serafinowicz, and his sidekick Arthur (Griffin Newman), who has a much bigger role – with a traumatic backstory and a mental illness to boot – in this Amazon show. The show has yet to be greenlit for a second season, though Edlund already has a five-season plan in mind.

The Tick Superhero Reboot on Amazon Finds Humanity in Humour

The Looming Tower
When: February 28
Where: Hulu

Based on the Pultizer Prize-winning book of the same name from Lawrence Wright, this Hulu miniseries will look at the rise of Osama bin Laden, the planning of the 9/11 attacks, and how the rivalry between FBI and CIA “may have inadvertently set the path for the tragedy”. Ali Soufan (Tahar Rahim), a former FBI agent who came closest to preventing the attacks, will be featured alongside other agents and experts, played by Jeff Daniels, Alec Baldwin, Peter Sarsgaard, Michael Stuhlbarg, and Bill Camp.

Jessica Jones
When: March 8
Where: Netflix

Marvel’s best show, centred on a superpowered alcoholic private investigator (Krysten Ritter) dealing with a traumatic abusive past and PTSD, returns with a new season after more than two years off-air. David Tennant’s Kilgrave will have a recurring role in Jones’ nightmares, as she takes on a new case that forces her to confront her past. Rachael Taylor, Eka Darville, and Carrie-Anne Moss are back in the supporting cast, with new roles for J.R. Ramirez, Leah Gibson, and Janet McTeer.

The Terror
When: March 26
Where: AMC

Ridley Scott is an executive producer on this anthology horror series inspired by Dan Simmons’ novel of the same name, which gives a fictionalised account of Captain Sir John Franklin’s (Ciarán Hinds) lost expedition to the Arctic in the 1840s, hoping to discover the Northwest Passage which links the Pacific to the Atlantic via the Artic Ocean north of Canada. But the journey is plagued with starvation, illness, mutiny, and cannibalism, along with an unknown monster in Lady Silence (Nive Nielsen).

After years of back and forth, a present-day reboot of the 80s cult high school drama is arriving in March on Paramount Network, the rebranded version of Spike. The backstories will be updated to fit our inclusive times, including making one Heather a male who’s gender-queer, but the rest remains the same. Shannen Doherty, who played Heather Duke, has a role in the pilot, but the show will have a tough time living up to the original.

Krypton
When: March TBD
Where: Syfy

Set 200 years before the birth of Kal-El aka Superman on his native planet, Krypton will follow his grandfather Seg-El (Cameron Cuffe) as a man in his 20s, who fights to redeem his family’s honour, having been ostracised and shamed, and save “his beloved world from chaos”. The show also stars Georgina Campbell as warrior Lyta Zod, who’s in a secret relationship with Seg-El, Ian McElhinney as Seg’s grandfather Val-El, and Elliot Cowan as chief magistrate Daron-Vex.

Winter is usually a slow time for big shows, with most networks treating the mid-season break as a time to test out new experimental TV. But spring is an important time for studios, and we already know about some shows that are coming later in the year. We’ll have a detailed round-up in March, but here’s what we have so far: