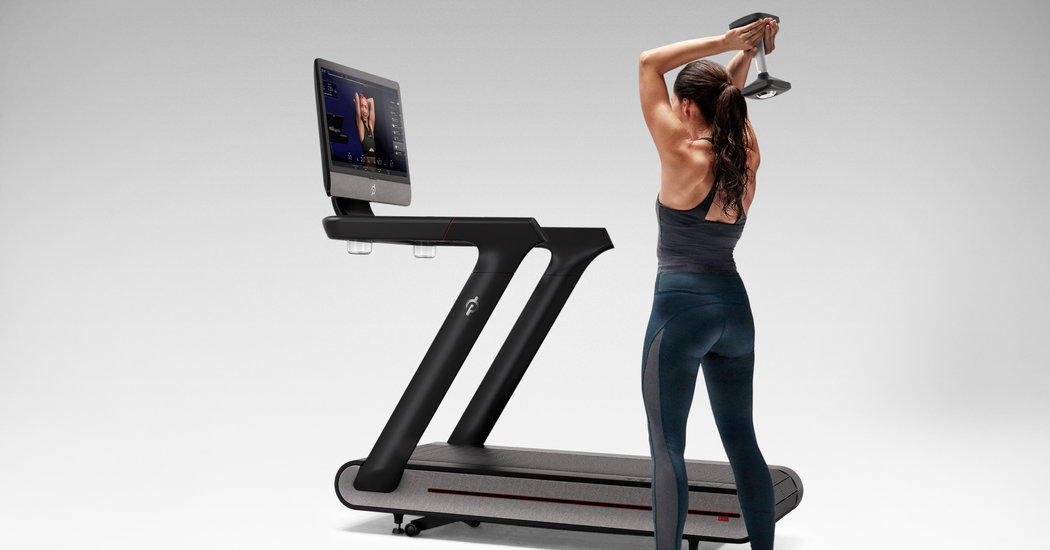 The home fitness start-up Peloton might sound faddish, like another in the parade of bougie tech-lifestyle brands selling dubious-sounding “disruption!” at millionaire prices. Its first product — an internet-connected, brushed-steel spin bicycle equipped with a 20-inch touch-screen — sells for $2,000, and you still have to pay $39 a month to get any content to fill the screen.

Peloton’s next act ladles on extra extravagance at an even higher price. At the International CES trade show in Las Vegas on Tuesday, the company unveiled a treadmill.

Called Peloton Tread, it has been in development for nearly two years and will begin shipping in the fall. Its design boasts exotic materials, enveloping surround sound, a running board that fairly glides under your feet, and a den-sized 32-inch screen. Its price: $3,995 — a princely premium over a no-frills home treadmill that might set you back about $500.

Any company that wants to sell a $4,000 treadmill is obviously aiming for a high-flying audience. But before you click away in proletarian disgust, there is something deeper worth studying about Peloton, its fanatical fan base and what its unusual path to success might portend for the future of the gadget business.

In an industry dominated by smartphone apps, cloud services and cheap knockoffs, hardware companies have had a hard time getting traction. But Peloton said it did nearly $400 million in sales last year, up from about $170 million in 2016, and said it planned to reach profitability this year. It’s done all this on the strength of a singular insight: The gadget itself isn’t as important as the service.

Peloton does not sell just a simple piece of hardware. Instead, the company spent tens of millions of dollars creating an inviting experience, complete with brand-ambassador celebrities and high-end retail locations. At the core of its business is a beguiling online service: Get on the bike, turn on the screen, and you are instantly connected with live fitness classes tailored to your preferences and athletic abilities. It’s like having a personal trainer who comes to your house whenever you like.

With its treadmill, Peloton is aiming for the fat middle of the global fitness industry. The path is fraught; lots of hardware start-ups have hit trouble translating early success into mainstream permanence. On Monday, GoPro, the camera maker of choice among outdoor sports enthusiasts, cut its revenue forecast, announced a layoff, and said it would consider a sale.

Peloton — which has raised nearly $450 million from several investors, including Wellington Management and Fidelity, at a valuation of $1.25 billion — surely faces hurdles in selling the Tread. The company plans to sell the treadmill on an installment plan, with a monthly price of $149, which makes it comparable to a high-end gym membership — and still pretty rich for many people. Peloton’s treadmill is also bigger and louder than the bike, which might make it less palatable to apartment dwellers.

And marketing the device could be tough. The company says the Tread is best suited for offering full-body “boot camp”-style exercises that you might do at a gym. That is, it’s not just for running — which is an odd line to push about a treadmill.

Yet consider how Peloton revolutionized the spin bike. People have been trying to reinvent home fitness machines forever. But from the NordicTrack to the Bowflex, most of these devices suffered the same fatal flaw — the novelty wore off, the guilt piled up, and soon you ended up with a very expensive laundry rack.

Peloton solves the novelty problem in the same way Netflix does: It creates can’t-miss programming. Its classes, which are streamed from a studio in Manhattan, faithfully recreate the moody, devotional atmospherics of a boutique spin class. The experience is communal and interactive — as you ride, you can see how you stack up against others in the class.

But it’s also more intimate and personalized than a spin class. The company produces more than a dozen classes every day in a variety of lengths, tailored to every workout style. The instructors are shot close up, and they often shout out the names and accomplishments of home riders, as if they are cheering you on directly. The bond between rider and instructor runs so deep that Peloton’s instructors have become the sort of social media celebrities who are instantly mobbed on the street.

“When you have the endorphins flowing and you’re in people’s homes three to seven times a week, there’s a real familiarity that builds up — and so, yeah, it’s a little interesting when people stop me at the supermarket to say hi,” said Robin Arzon, Peloton’s vice president of fitness programming and its chief instructor.

If this sounds over-the-top, you’re right: The Peloton cult is real.

That annoying friend who can’t shut up about how SoulCycle is her church? Peloton groupies are kind of like that, only more insistent, because they also point out how convenient it is — you can Peloton at any time without prebooking, without commuting, in any clothes you want. They are also likely to argue they are saving money, too: If you ride three times a week for a year, you’ll pay about $16 per Peloton workout in your first year, cheaper than classes at many fitness studios.

“Over 95 percent of the bikes we’ve ever sold are still paying subscriptions,” Mr. Foley said.

And here’s a confession: I’m one of them. After hearing three different people in the tech industry sing the bike’s praises last summer, I asked Peloton to send me a bike to review to see what the fuss was about. After three weeks, I couldn’t give it up. I called up the company and handed over my credit card number. I’ve been a committed rider ever since.

The one problem with the spin bike is that it does not offer a complete workout. Spinning is by nature a lower-body, cardio-heavy exercise, but there is a far larger audience of people who want a full-body workout that combines weight training and cardio.

This is the animating idea behind Peloton Tread.

“We think only about half the workout will happen on the treadmill,” Mr. Foley said. “You’ll start with some jogging, perhaps sprints, then get off the treadmill, do curls, push-ups, planks, then get on the treadmill and start the cycle again. When you’re done, you’ll have spent 40 minutes there and burned 700 calories, and every part of your body will feel energized.”

I stopped by Peloton’s New York offices several times last fall to check on the development of the treadmill, which departs from tradition in several ways.

Most treadmills are controlled with small buttons that are difficult to press while running at high speed. Peloton’s uses two big knobs that look like the resistance knob on its bike — a control mechanism that doesn’t require any close fiddling. The company also spent many months engineering the treadmill’s running deck. Unlike most other treadmills, whose track effectively pauses each time you step on it, Peloton’s uses a series of slats that sit on ball bearings — a mechanism that creates a springy, “frictionless” track that it says offers a more comfortable run.

I can’t tell you if this amounts to a significantly better treadmill. The device is still only a near-final prototype, and it will be months before the company begins creating workouts.

But remember, in the Peloton story, the gadget itself isn’t as important as the service. Peloton’s treadmill will be powered by the same irresistible content-machine that powers its bike. For many who are already in the growing club, that alone might be enough of a reason to commit to it.