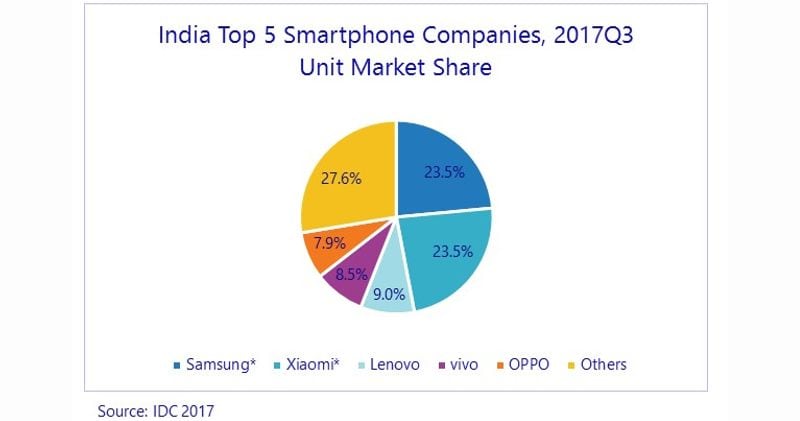 Xiaomi and Samsung are jointly the top smartphone brands in India, according to International Data Corporation latest report. The latest Quarterly Mobile Phone Tracker by IDC for Q3 2017 reveals that Xiaomi along with Samsung captured 23.5 percent market share in the last quarter.

Xiaomi, on the other hand, almost tripled its shipments year-on-year and doubled quarter-on-quarter in last quarter. IDC adds that Xiaomi focus on the traditional channel for marketing its products has been a key strategy. Talking about top Xiaomi products, the Redmi Note 4 was the best-selling smartphone in India again as the company shipped roughly 4 million units in this quarter. IDC pointed out that Xiaomi’s aggressive approach for pricing its smartphones made it a clear winner in selling devices on e-commerce retailers and direct Internet platform. The company’s offline expansion through preferred partner program and Mi stores has been also getting a good response as its shipments doubled from the last quarter. Xiaomi recently announced that it shipped 9.2 million smartphones, a record number of units, in India in Q3 2017.

Lenovo (including Moto) made its comeback as the third smartphone brand and saw an increase of 83 percent in shipments from the previous quarter. IDC says that recent launches under Moto brand has reversed internal brand share, and claims that “Motorola contributes to two-third of its portfolio.” Vivo was the fourth top smartphone brand, and saw a dip in its market share. In terms of shipments, the Chinese company saw a decline after a record breaking second quarter. According to IDC, Vivo V7 Plus and Y69 received strong initial traction in the market. At the fifth position was Oppo which had its biggest sell-in quarter so far in India as vendor shipments increased by 40 percent sequentially and 81 percent from same period last year.

“In the coming few quarters, both Samsung and Xiaomi would need to further strengthen their channel play and significantly differentiate their products on technology and quality to sustain and fight for leadership in this hyper competitive smartphone market,” said Upasana Joshi, Senior Analyst, IDC India.